Oh when the Saints... 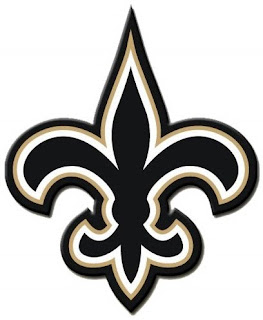 So last night I watched the Superbowl. Now, I'll be the first to admit that I'm not a sports guy. I'd LOVE to spend my Sundays lounging around watching football. It's just not that important to me. I do on occassion like to watch a hockey game (OHL) or football game (CFL) if I'm there in person.

The one major exception to this rule is of course the Superbowl. Mainly because it's usually the PERFECT excuse for a guys night out. I've been to some odd parties before. LOL like the time I had been talking to this girl from Hamilton over the internet. She invited me to the Superbowl party put on by her church. I dragged my buddy Mark with me and won a football with a built in pump (which I still have BTW).

Now my buddy Mark is the sports nut or 'Commish' as he likes to be called by his fanatsy football cohorts. So I can usually count on him planning some sort of Superbowl party. Well this new year has been crazy busy so we never wound up connecting in time to figure out what the plan was. So this Sunday my wife made chilli in the slow cooker and I was blessed with an afternoon of pre-game analysis and the game itself.

I was excited because this year I had an actual favourite. I had been rooting for the Saints since the beginning of the season. After all they had suffered from as a result of hurricane Katrina both the city and the team had to rebuild from the ground up. It seemed like, for the team at least, this was their chance to rise up.

Everytime people asked who I was pulling for through the season I'd say "I'm a Titans fan (don't ask why.. I just am) but I'd really like to see the Saints go all the way. Most often I got chuckles. Then something along the lines of "they are a good team. there are just so many BETTER teams. they'll never make it.

So when I heard that they finally made it to the big show I was excited, momentarily. I saw momentarily because i then heard they were up against Peyton Manning & the Colts. A formidable team to say the least.

In the end, I like how Coach from NBC worded it "My head says the Colts, but my heart says the Saints" That's what it came down to... a game of heart. the Colts were strong. But they played a typical football game straegy figuring tried & true would get them through. But the Saints had heart. They didn't have anything to lose. They have already made it this far. So they played a riskier game. Sure it cost them a few penalties (whether from nerves or being risky I'm not sure) but it also landed them a few big plays.

Like when they went for 4th & goal. If they made it GREAT... if they didn't (& they didn't) then the Colts have really bad field position on turn over. Or the interception for a touchdown. Or going for the 2 point conversion. New Orleans made big plays and made them count.

So call me a bandwagoner or call me a sports noob... but just be sure to remember I was right:

I've had other blogs in the past that I used for venting and posting updates on my life. I never really updated them on a regular basis (not that I post here very often). Now with Facebook I find that blog posts, emails, and the such are falling by the wayside.

I know I have some good solid pieces so far. I just need to memorize them so I can start 'performing' them. My problem is that I suck at setting time aside to practice. I don't want to practice where anyone can actually hear or see me. And when I do I feel like a total knob. So until I get in some SERIOUS practice I don't see myself placing much better at poetry slams.

I REALLY want to put out a chapbook. I don't really care if I'm 'ready for it' as a writer. I think it will (at the very least) give me credibility in my own mind as a writer. As of right now I'm looking for an artist / graphic artist. I had someone lined up who wanted to do it for free! But they never got back to me.

Writers block. It's weird because I have lots of things I have ideas about or opinions on but when I try to write the thoughts just can't come together. I think I might just have to start writing random posts on here about whatever is going on in my mind because writing is writing.

So I will definitely....most likely....probably....maybe....possibly be posting here more often. Maybe I'll start tomorrow?
Posted by Unknown at 14:33 1 comment: