So this past Saturday I went to the Toronto Poetry Slam (TPS) for a change. It's not often I can make it down because it goes late into the night, then I still have to drive home afterward, and then try to wake up for church the next day.

But I like making it out for the Anything Goes Slam. It gives me a chance to do some covers which I have memorized a little bit better than my own stuff. That and you never know what to expect. In years past there has full frontal male nudity, chicken suits, and a slam within a slam. Not to mention some AWESOME covers!

The day of, I wasn't sure we'd actually go. My wife felt a cold coming on Friday night and by Saturday it was full fledged. But being a truly loving wife, who knew how long I've wanting to go to TPS, she went anyway.

We met up with my brother-in-law before hand. He lives a stones throw from Kipling station. So we met up, went out for dinner, then took the subway downtown. He's a maintenance engineer for a large building downtown. So he took us in for a tour. I would be LOST amongst the hundreds of pipes, valves, & gauges. The really cool part was when he took us up to the rooftop. AWESOME view! 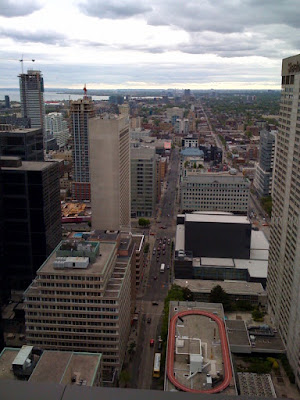 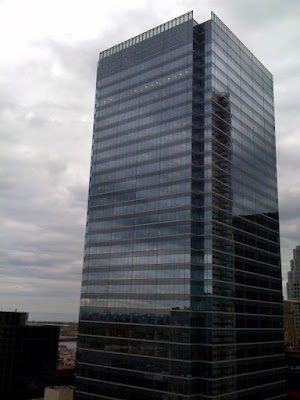 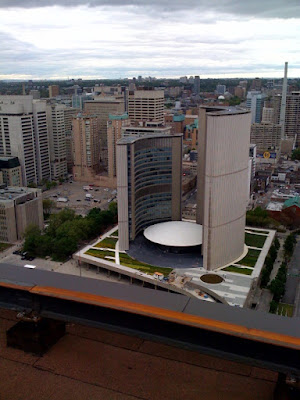 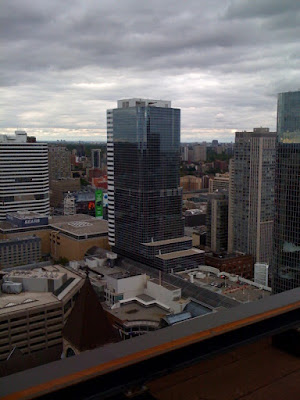 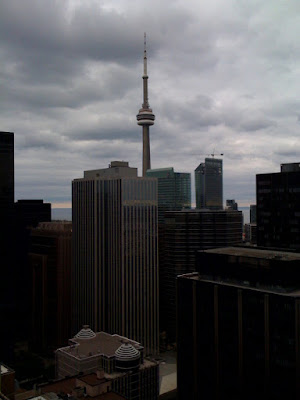 We were @ the Drake supremely early. But we bumped into people as they were heading in to set up. So it gave me a chance to introduce my wife & her brother to Jillian Christmas & Dave Silverberg. We didn't realize there was a lineup going on inside until we went inside 10 minutes before the doors were supposed to open. So we barely got chairs to sit on (evil, EVIL, fold-up wooden chairs). I'd love to just bring my own camping chair sometime! LOL

I think I was 3rd or 4th last. Silverberg, Crouton and maybe someone else went after me. I had been planning to do a couple Old School Hip Hop covers the 1st 2 rounds. And if a miracle happened and I made it to the 3rd round I was going to drop my Peace piece. But as it turns out the judges hip hopped out by the time I took the stage. There was this animated rapper from the M dot who did alright and then there was Tripp's trippy... I don't know what it was. But it seemed like it was supposed to be hip hop. My downfall was I don't have breath control. And you need it to pull of Young MC. I prolly should have led with my 2nd round option, Krs-One's By All Means Neccesary. Oh well.

The feature was very talented. But it felt... a lil awkward. Almost like her style isn't an exact fit for a slam. Especially the Anything Goes Slam. She was accompanied by a flautist (someone super dope on the flute). My problem was I kept hoping he'd start doing beat-boxing at the same time like that guy on Youtube, even during his 5 min solo of Lollipop.

Sadly, I didn't make it to the 2nd round. So since I really only wanted to hear 2 of 6 who made it and my wife wasn't feeling well I left during the intermission.

I'm always asking myself what my goal is in doing poetry slams. Am I trying to win for the money or the fame? Do I want to get a feature slot someday? Do I want to get published? Even self-published? Is it just anexcuse to get out of the house once or twice a month? Is it because I get to rub shoulders with other creative people? Or is it because I just like writing and sharing what I write with others?

But this Thursday I have the Burlington Poetry Slam at the Black Bull Pub (Guelph Line jus North of the 403/QEW) at 8pm. Extra special because it is my last and final chance to qualify for the Burlington Slam Team going to Ottawa for nationals in October (again... is this something I want and can dedicate to?).

Then, the following Friday night a friend from church hosts a coffee house @ her house (parents house really) and I'm going to introduce the normally musical open mic to some sopken word. We'll see how it goes. because if I really want to keep doing this spoken word thing... it's going to need to be more local if I want to see it bloom while being a good family man at the same time.
Posted by Unknown at 14:37 1 comment: