So I tried this recipe posted by my cousin on her blog (http://foolovesfood.blogspot.ca/2012/12/whirly-twirly-pizza.html). It didn't turn out exactly as planned. But I did like the overall idea of it. It just needs some tweaking.

First off, I used regular flour for the counter instead of cornmeal. But I liked the tip of using olive oil on my fingers to keep the dough from sticking. So I put it on the knife when when I cut the log and it worked out pretty good. I also used regular pasta sauce instead of "pizza sauce".

For ingredients, I used finely chopped bell peppers and shredded sandwich ham. When I put the logs sections in the dish I covered them with the chunks of ingredients that fell out when I rolled the log. Then I put extra sauce and cheese on top.

I put it in the oven and after cleaning up for a few minutes I put on the timer for 15 minutes. When the timer went off I just turned off the oven and let it sit there for about 10 minutes while got ready for dinner.

The bummer part is it didn't cook all the way through. :( it's probably because I cooked it in a corningware casserole dish instead of a glass one. It only cooked around the edges. Which thankfully wound up being enough for each of us to have a full serving. So while we ate I put it back in the oven at 350 for another 20 minutes.

I like the way it fills the dish I used. So next time I'm going to skip topping it with more sauce and cheese (it wound up being too cheesy). I'll add some baby spinach (or some other green). I'll prolly drop the temp to 350-375 and doubling the time to 40 minutes. Because what came out the oven the second time was really good. 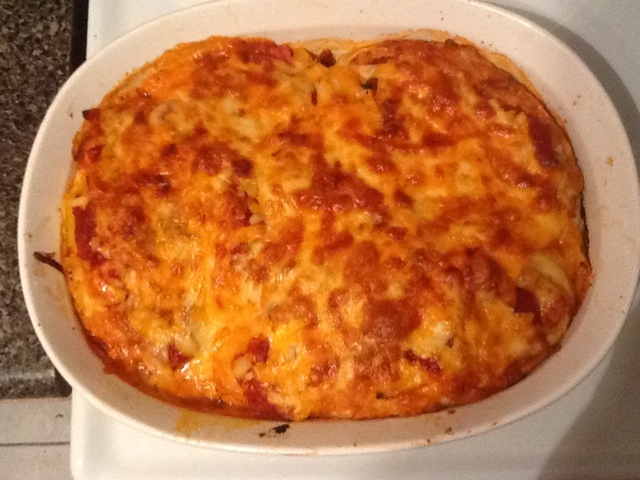