So if you check my finds lately you'll notice I've been working on a poker themed series of caches in a small town near where I work.  Well today I've finished the caches in the series and plan to do the final in under a week.

I've enjoyed this series for a couple reasons:

1. Minimal Bushwacking - this means I was able to work on it on my lunch (which has been most of my caching to date). Plus I'm traipsing burrs or anything else back into the office. 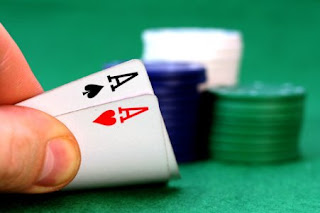 2. Size Small - as a mostly urban cacher I've learnt to endure the tiny bison tubes and itsy-bitsy-nanos. But I like the odd Tupperware container now and again. This whole series are small sized containers with a regular size for the final.

3. Butterflies - while finishing the last cache I needed for the series I wound up walking through a field of butterflies. It was awesome! I didn't take any pictures because all I had was my iPhone.

It's these type of experiences that i think are going to keep me geocaching for a while yet because, let's face it, I wouldn't have had this experience otherwise.
Posted by Unknown at 14:14 No comments:

About 2 weeks ago I got my new Magellan ToughCase in the mail.  I had been having issues with my dinosaur of a GPSr (Garmin eTrex Legend) and wanted something that would do the job but not cost me a fortune.  With the ToughCase I can now take my iPod Touch (or iPhone 3G) out geocaching!  It's a bit finicky they way it needs to be charged.  But they have taken care of the issues with working at walking speeds.  Not mention it has a tough and waterproof case.

I took it out for a lunch time cache run and it was AWESOME!  It was reading 7-10 meter accuracy and zeroing at GZ.  I did 2 cachers that lunch hour and a handful more with it since.  I even placed my first hide using it to get the coordinates. 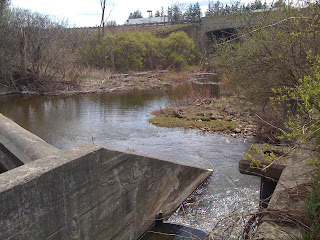 Today I went back to take some pictures of the second cache I did that day.  Because in all the excitement I forgot my camera at home.  Now my iPhone was in the car but it was COLD out!  I was lucky I even grabbed that 2nd cache.  I was on my way back to work when I pulled over because I remembered looking at the Geocaching.com map and that there was a cache near by.  I pulled out my iPod Touch app and sure enough 150 m away! 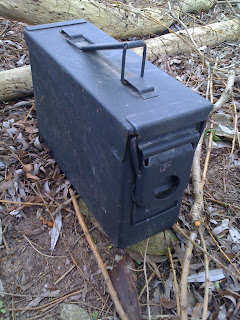 Despite being a stones throw away from a major highway the location is rather picturesque.  It was a nice easy stroll to GZ.  Once there I just had to duck a few branches.  When I grabbed the container I was surprised to pull out an ammo can!  I was surprised because ammo cans aren't very common in Canada (a small military means minimal amounts of army surplus.. besides Tupperware is cheaper!) and because the description had mentioned a first aid kit container. 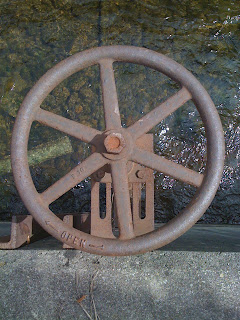 The description also advised cachers to take the extra few steps and check out the now defunct dam.  I'm glad I did.  There were concrete walls diverting the water where the dam had been dismantled.  A few parts still remain.  When I went back today to take the pictures I forgot to take last time I discovered that someone has been working hard at restoring the dam.  Or rather, something.  As you can teel from these pictures it appears that there is a beaver in the area who is busy building a dam on it's own.  So what used to be 'No Dam Good' is now 'New Dam Good'.

Today marks my 50th geocache find.  I know it's not a huge number considering the fact that I started 7 months ago.  But starting a new outdoor hobby at the same time as having a young baby and winter soon after that can slow one down.


I know that other geocachers tend to pick a memorable cache to do for their milestones.  Mine?  It was just a step up from a park and grab near a carpool parking lot (GCPD8T).  I chose this cache because it was hidden by a cacher in Ontario with the 2nd most finds:

I figured what better way to mark s small numbers milestone than by finding a cache hidden by someone lits TONS of them.  Who knows, maybe some of the geocaching skills will transfer on to me.  I know I know! But a man can dream!

On my way to making my 50th find I placed my first hide.  I just filled out the submission form.  So check back and I'll update this post when it's approved.  It's nothing fancy.  Just a quick P&G (park & grab).  But I thought the location was interesting.

In the next few months I plan to place many more caches.  As a matter of fact, I'm currently planning a series of caches.  So stay tuned to my blog posts with the geocaching label.

My first hide has now been published.  It's called 'Telemarketing' because there is a phone booth (a rarity these days) with all sorts of advertising stickers all over the doors.  Sadly it only has 1 find so far.  Around here once the FTF frenzy has cooled off people take their time to grab a new hide.  I think the D1/T1 rating puts people off too.  I might bump the difficulty up to a 1.5.
Posted by Unknown at 14:03 1 comment: