So today my unit had to go to another work site for a meeting about a specific file. Afterwards, we had a second informal meeting with the local unit, who belong to the same department as my unit.

Part way through the meeting someone popped into the room to let us know about some brownies & ice cream cake in the lunch room that were free for the taking. Myself and couple others heeded the invitation and each grabbed a couple brownies and a slice of cake.  After the meeting broke we then went to Boston Pizza because it was now lunch time and after lunch we all went back to our respective locations.

When I got back to the office I went to hang up my coat. But I decided to check the pockets first to make sure I didn’t forget anything later. When I reached into my right pocket I felt something a little heavy and wrapped in paper towel.

“Weird” I thought, “ I don’t remember putting any paper into my pocket”. I pull it out to look at it and I see that something is wrapped inside. I unroll it to find what at first glimpse looks like a piece of turd!  But I quickly realized it’s just a bunch of brownies (note the chunks of walnut) mushed together and molded into that shape of one. 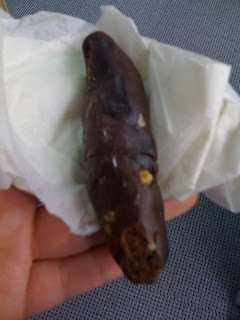 After a few minutes of whodunnit discussions, a couple accusations and insane laughter I finally found out who the pranksters were and gave them a well deserved kudos on a prank well played.
Posted by Unknown at 15:32 1 comment:

Email ThisBlogThis!Share to TwitterShare to FacebookShare to Pinterest
Labels: Life

So far I've been doing mostly urban caches, which means mostly micros & nanos.  There are the usual suspects: light pole skirts and traffic sign magnetics.  I like the ones that are a little more inventive.

I also recently signed up for a premium membership.  The idea was to make planning caches along a roadtrip easier.  But I also get to sign up for email notifications of newly hid caches.  Mainly because I'm eager to get a FTF (First To Find) under my belt.


I was online this morning making a bookmark list for an upcoming day trip when I noticed this cache. "Hmm" I thought, "I don't remember seeing a cache in that parking lot before".But it wasn't until I was on a completely fruitless cache run on my lunch break that I saw the email notification of a new cache. Woo hoo, I can get my first FTF. So I open the Geocaching.com app on my iPhone and load the cache. DOH! It's already been found.But I had some banking to do after work so I swung by and figured I'd give it a shot. I got out of my car and saw a guy walking around patting everywhere and holding a GPSr in his hand. Wooohoo, my first bump in with a fellow geocacher in the wild.We fumbled around for a few minutes before Big Zee made the find but was kind enough to offer me first to sign. We traded stories for a lil while before we each made our way home after an afterwork cache.