Lately I've been trying new recipes in an effort to expand my repertoire as a cook as well as to find healthier options for my family to eat.

With our toddler in daycare and my wife's shift changing week to week we normally have a limited amount of time to eat dinner by the time we get home. So most of my recipes have been for slow cookers.

But this week she was on the early shift so I was able to try some recipes that take slightly longer to make. We had tacos that I'm thinking I'll try as a taco salad instead (since they fall apart in UR hands anyways).

Last night I wound up trying the recipe for Skillet Lasagna that my cousin had posted a month or so ago. For the first time in I don't know how long I actually followed the recipe without changing or substituting ingredients (aside from adding some spices for flavour). 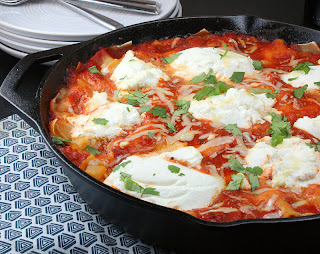 It turned out NOTHING like the picture I saw. I think I was supposed to leave the lid off while it simmered because it wound up being VERY watery. After leaving it in the skillet during dinner and dishes afterward the noodles absorbed most of the juices and was much better.

Perhaps next time I'll try this on the weekend and/or with the lid off. We like our pasta. So I refuse to give up on a different method of cooking one of my all time favourite meals.
Posted by Unknown at 09:07

Email ThisBlogThis!Share to TwitterShare to FacebookShare to Pinterest
Labels: Cooking

That's the thing with trying new recipes a lot, sometimes you need to cook it a few times to perfect it. I need to not always try something new so i can perfect some of the recipes that didn't turn out as good the first time.